LAC standoff: PLA, Indian troops begin process of disengagement but will be a long haul

LAC standoff:Beijing announced the “synchronized and organized disengagement” from the north and south banks of Pangong Tso in accordance. 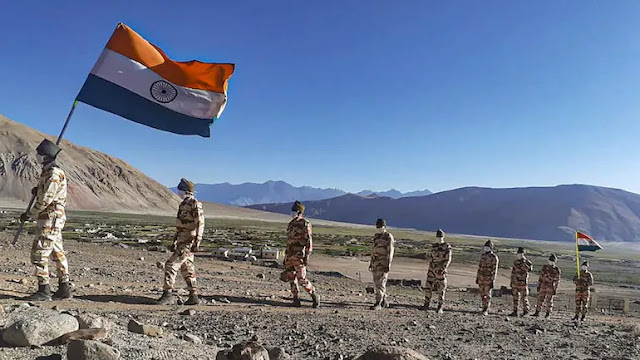 NEW DELHI: India and China on Wednesday kicked off initial disengagement in the Pangong Tso area of eastern Ladakh, the first easing after a prolonged military confrontation, by pulling back some tanks, howitzers and armoured vehicles. This will be followed by withdrawal of rival frontline troops from the `friction points’ if the phased de-escalation plan does not derail like it did after the Galwan Valley skirmish in June last year.

The Chinese defence ministry in Beijing announced the “synchronized and organized disengagement” from the north and south banks of Pangong Tso in accordance with the “consensus reached” in the ninth round of the corps commander-level talks on January 24. 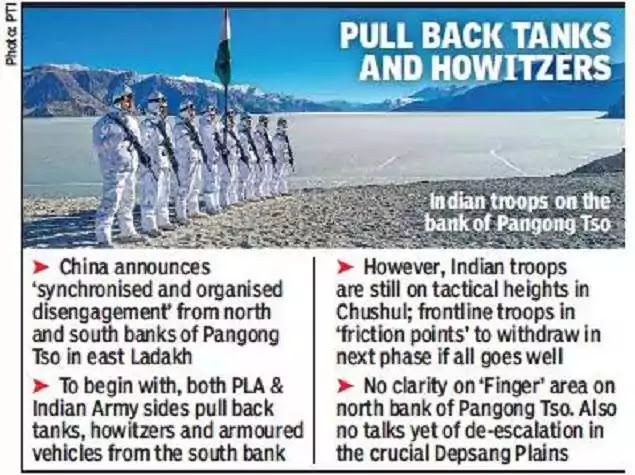 “The initial steps are positive on both the north and south banks of Pangong Tso, with some simultaneous mutual pullback taking place smoothly. But it will be a very long haul in the sequential disengagement, de-escalation and de-induction process, with the progress being monitored and verified at every stage,” said a top Indian source.

There was, however, no official word on the disengagement underway from India on Wednesday. Instead, defence minister Rajnath Singh will make a formal statement in Rajya Sabha on Thursday on the “present situation in eastern Ladakh”, said officials.

The high-powered China Study Group had also met on Tuesday to discuss the disengagement in the over nine-month-long military confrontation, in which soldiers have been killed on both sides for the first time in over 45 years.

Sources said the mutual withdrawal of heavy weaponry like tanks had begun from the south bank of Pangong Tso-Kailash range of mountains in the Chushul sector. “The rival tanks were in close proximity to each other. Any inadvertent error could have led to vertical escalation and matters spinning out of control,” said a source.

But there was no clarity on whether the two sides will stick to the original plan in the `Finger’ area (mountainous spurs) on the north bank of Pangong Tso. Both sides had earlier more or less agreed to Indian soldiers pulling back to their Dhan Singh Thapa post between Finger-2 and Finger-3, with People’s Liberation Army (PLA) troops withdrawing to their positions east of Finger-8, with the area being designated a ‘no-patrol zone’ for the foreseeable future.

The PLA has occupied and fortified the 8-km stretch between Finger-4 and Finger 8, where India contends the Line of Actual Control runs north to south, since early-May.

There is also as yet no talk on de-escalating the opposing military build-ups in the strategically-located Depsang Plains, where the Chinese soldiers have been blocking Indian troops from going to their traditional patrolling points since at least May last year.

India’s need for extreme caution for disengaging from even at the immediate “friction points” at Pangong Tso, Chushul and Gogra-Hotsprings was reinforced afterColonel B Santosh Babu and 19 other Indian soldiers were killed during the violent skirmish with the PLA after it reneged on the agreement to dismantle an observation post in Galwan Valley on June 15.

But there was general optimism on Wednesday that the disengagement would go through at the “friction points” now. TOI has been reporting since October-November last year that though India and China had broadly agreed to pull-back troops and heavy weaponry from `friction points’ in the Pangong Tso-Chushul area, the exact modalities and sequencing of steps were proving to be hard to finalize till now.