South Korea to Push for SPADGMS, Minesweepers Deal With India 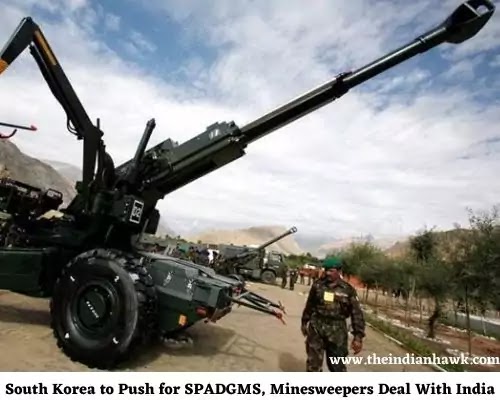 The $ 3 billion Self Propelled Air Defence Gun Missile System (SPAD-GMS) deal is expected to be part of discussions between the Indian Army Chief Gen MM Naravane and the top brass of South Korea. In the SPAD-GMS, South Korea’s Hanhwa Defence had emerged as the lowest bidder beating the Russian competitor.

In line with the government’s `Act East Policy’ and to explore avenues for further expansion of the military ties, the Indian Army Chief Naravane has left on a three-day visit to South Korea on Monday (December 28, 2020). He will be holding talks with his counterpart – the army chief and chairman of Joint Chiefs of Staff as well as the minister of defence.

He will also meet with South Korea’s minister of Defence Acquisition Planning Administration (DAPA). The army chief’s visit to South Korea’s capital Seoul comes close on the heels of his recently concluded visit to the UAE and the Kingdom of Saudi Arabia.

While in South Korea, the Indian Army chief will go to the Korea Combat Training Centre in Gangwon province and Advance Defence Development (ADD) facility which are located at Daejeon.

Both countries have elevated their bilateral relations to Special Strategic Partnership in 2015. India and South Korea have been in discussions for several military platforms and weapons, especially naval shipbuilding.

In 2019, the South Korean company Daewoo Shipbuilding & Marine Engineering had responded to Indian Navy’s Expression of Interest (EoI) for six advanced conventional submarines under Project-75I (India). And KSS-3 submarine for the Rs 45,000 crore proposal of the Indian Navy.

The Project 75I is expected to be processed under the Strategic Partnership Model (SP), and the submarines will be built in India through technology transfer. As reported earlier, the OEM will have to tie up with an Indian company for manufacturing under the Make in India initiative.

South Korea considers India as a serious power and a key partner within the region and India looks at South Korea a major partner under the `Act East Policy’. Both countries have last year inked a logistics agreement, which is going to help the Indian Navy while operating in the Indo-Pacific Region and in interoperability.

What Was The Army Looking For In The Self Propelled Air Defence Gun Missile System?

In 2013, the Indian Army had floated a requirement for five regiments of a self-propelled air defence gun-missile system. The 104 units were budgeted at approximately $2.5 billion. Each unit having twin 30 mm cannons. There are four short-range missiles fitted on a tracked chassis.

Because they can help in protecting critical installations and areas which can be hit by drones, helicopters or low-flying aircraft.

And, as has been reported by Financial Express Online, the South Korean Company Hanwha Defence had emerged as the lowest bidder by beating two Russian contenders. The decision to scrap the whole deal was taken by the Ministry of Defence on the grounds that the specifications mentioned are now dated.

What Is The Indian Army Looking For?

These SPAD-GMS are expected to replace 1360 obsolete Bofors L 70 40mm single barrel and Soviet-era ZU-23-2 towed 23 mm twin-barrel weapon systems of the Indian Army. And the Indian Army needs almost five regiments of the guns. These guns can be deployed with the forces and be relocated based on the threat perception.

When the Army chief talks with the military brass and the minister, there could be some forward movement in the negotiations for 12 mine-counter measure vessels (MCMVs) for the Indian Navy. These are to be built at the Indian Goa Shipyard through Transfer of Technology (ToT), under the `Make in India’ initiative.

South Korean Company Kangnam Corporation and Italian shipbuilder M/s Intermarine had responded to the MoD RFI (Request for Information) for the MCMVs.

These MCMVs are required on an urgent basis to fill gaps in the navy’s mine warfare capability.

The discussions with the South Korean Company Kangnam Corporation was stalled due to certain issues related to the indigenous content as well as the terms and conditions of ToT.

Why Do Navies Need Minesweepers?

These are deployed to help secure the harbours by locating and destroying underwater mines and are considered vital for keeping critical sea lanes safe.

The Chief of Army Staff had accompanied Foreign Secretary Harsh Vardhan Shringla to a visit to Myanmar. During that visit in October, the Indian side announced its decision to supply an attack submarine to the Myanmar Navy and to further enhance military cooperation between the two countries.

This was followed by Army Chief’s three-day visit in November to Nepal. The visit to the Himalayan neighbour had significant diplomatic overtones.

During his visit to South Korea in 2019, the defence minister Rajnath Singh had invited the top defence majors to participate in various defence projects in India.

The companies which specialize in military platforms in South Korea are allowed to Transfer Technology as there are no laws to stop the transfer. They are keen to work with the Indian private sector companies under a joint venture.