Amid the standoff with China at Ladakh border, PM Modi, inaugurating the Atal Tunnel on Saturday, spoke about neglect of need to improve border infra. 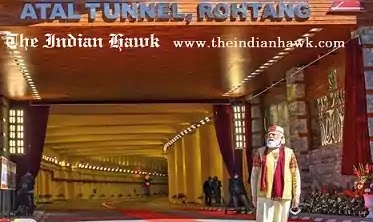 ROHTANG/ NEW DELHI: Prime Minister Narendra Modi on Saturday said his government would continue its focus on speeding up projects of strategic importance and improve the infrastructure in the border region.

Modi, who was inaugurating the Atal Tunnel which opens a shorter all-weather route underneath the Rohtang pass linking Manali to Leh, spoke about the neglect of the need to improve border infrastructure in the previous decades to assert that “the situation has now changed and in the last six years, the border infrastructure — be it roads, bridges or tunnels — is being developed with full impetus and great speed”.

The PM’s remarks came amid a stand-off with China which many have attributed to Beijing’s anger over the recent upgradation of the border infrastructure to facilitate faster movement of troops and stores.

Modi said the Atal Tunnel will facilitate traffic between Manali and Leh even during the winter when snowfall would result in the closure of the route besides slashing the distance by 46 km to bring down travel time by 4-5 hours.

“Just like Atal Tunnel, several other projects of strategic importance were neglected for years. Strategically important Daulat Beg Oldie airstrip in Ladakh was lying defunct for over 40-50 years. What was the compulsion, what kind of pressure was there? … I don’t want to delve into those details as plenty has been said and written about it. But reality is that the Daulat Beg Oldie airstrip could become operational due to resolve of the Air Force and political will which was earlier lacking,” Modi said in what looked like a jibe aimed at Congress.

The operationalisation of Dault Beg Oldie, an airbase at the highest altitude and just a few kilometers from LAC, has been identified as one of the reasons for China’s bellicosity on the border.

“Connectivity is directly linked with the development of the country, especially in border areas where connectivity is linked with national security. However, the political willpower and seriousness about such projects was absent for several years,” Modi said, adding that he could cite more than a dozen strategically crucial projects, which had to be consigned to the deep freezer because of the lack of political resolve.

Modi went on to list the delay in procuring sophisticated weaponry and equipment—fighter planes, sophisticated rifles, bulletproof vests, ammunition and gear for harsh winter— as well as delay in implementation of ‘One Rank,One Pension’ scheme. Although Modi did not mention names, his remarks in a state, which contributes large number of personnel for the armed forces, were clearly aimed at Congress.

He said while the all-weather tunnel which could be boost the local economy by helping develop tourism and horticulture, was conceived by former Prime Minister Atal Bihari Vajpayee who had laid the foundation stone for the approach road for this tunnel in 2002, the subsequent regimes chose to put in on the back-burner.

“Only 1300 metres had been completed till 2013-2014 after it was inaugurated by Vajpayeeji and at that rate the tunnel could not have become operational before 2040,” he said as he praised Border Roads Organisation for expediting the project. It was a dream project for Atalji. There could not be a bigger satisfaction than watching completion of the project,” Modi recalled.

The PM also said completion of project shows his government’s commitment to ensuring ‘sabka saath, sabka vikas” while earlier dispensations used to focus more on areas beneficial from their political point of view.

Atal Tunnel, which with a length of 9.02 km is world's longest at such an altitude and conforms to modern sophistications, including means for speedy evacuation in a situation of emergency.

After a public rally at Sissu, Modi travelled through the tunnel in an open vehicle.