In Wake Of Border Dispute, India Seeks A Responsive Partner In Russia And Extends A Cooperation Pact 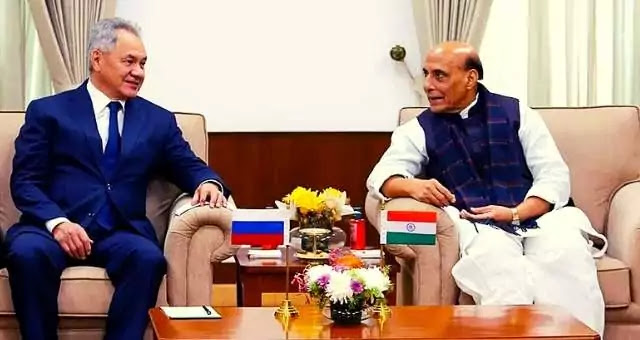 "The pandemic, extraordinary militarization and armament expansion in our neighborhood, and completely unprovoked aggression on our northern border since early summer of 2020 have thrown in several challenges," Singh said. "Recognizing that its development needs are colossal and that its defence challenges are legitimate, real, and immediate, India seeks partners who are sensitive and responsive to India's expectations and requirements."
The maiden Indo-Russian 2 + 2 Ministerial discussion, which took place here on Monday, was dominated by unprovoked aggression along the Line of Actual Control, collaboration in Afghanistan collaborative projects in the Central Asian theater, and coordination in the Indian Ocean Region and ASEAN.
Despite the current state of geopolitics, the two countries have maintained excellent strategic ties. So far, Russia, which has a solid strategic understanding with China, has maintained a regular flow of supplies and sensitive equipment such as the S400. India also sought to allay Russian fears about Delhi's increasing defence ties with the United States by pointing out that the contract was approved despite increased pressure and the prospect of sanctions.
At the meeting, a Rs 5124 crore deal was signed to manufacture AK 203 assault weapons for the armed forces in Amethi. Over the following ten years, the facility is anticipated to produce 5.31 lakh rifles, with technology transfer taking place during the production of 70,000 weapons.
The meeting's focus, according to sources, was on technology sharing and cooperative research and manufacturing of weapon systems in the coming decade, with the AK 203 contract serving as the launch pad for a new cooperation model.
Foreign Minister S Jaishankar, who welcomed Foreign Minister Sergey Lavrov and defence Minister Sergei Shoigu ahead of the 21st annual Summit with Defence Minister Rajnath Singh, laid out the theme for the meeting in his opening remarks.
"Terrorism, violent extremism, and radicalization are prominent among them. The situation in Afghanistan has ramifications throughout the world, notably in Central Asia. The Middle East and West Asia continue to be hotspots. Another area of concern is maritime security and safety. In his introductory remarks, Jaishankar stated, "We both have a mutual interest in ASEAN centrality and ASEAN-driven platforms."
The four ministers, according to ET, looked at the possibility of cooperating outside of ASEAN, in Central Asia and the Indian Ocean region. Russia has joined the Indian Ocean Rim Association as a discussion partner and participated in a naval drill with ASEAN. While Moscow wants New Delhi to strengthen its footprint in Central Asia, India has pushed Russia to become more involved in the Indian Ocean region. In various ways, Russia and India are key players in West Asia, and there are hints that they could coordinate their strategies in the volatile region. The agenda for the 2 + 2 talks was first reported by ET.
As they arrived in New Delhi for the stand-alone discussions and the inaugural "2+2" dialogue, Jaishankar greeted his Russian colleague with elbow bumps, while Defence Minister Rajnath Singh presented the Russian defence Minister with a souvenir of a naval ship.
Meanwhile, Lavrov informed reporters that negotiations to manufacture the Russian anti-coronavirus vaccine Sputnik Light in India are nearly finished. "The Sputnik Light talks are almost finished," he stated. The agreement on the republic's manufacturing of the two-component vaccination Sputnik V is also being implemented, according to the minister. "A significant scale is expected," he stated, "about a hundred million doses every year."