As Officers Secure Civilian Ranks in the DMA, the Military's Goal of Assimilation Moves Ahead

A bizarre paradox has emerged in recent decades in India’s higher military circles, especially the Army, of not only seeking all-round one-upmanship over their civilian counterparts but also of completing the circle and striving doggedly for bureaucratic rank structures.

This manifested itself recently, after four service officers – two from the Indian Army (IA) and one each from the Indian Air Force (IAF) and Indian Navy (IN) – were formally appointed additional and joint secretaries in the newly created Department of Military Affairs (DMA).

All four officers – including one three-star and three two-star officers – had earlier been conferred equivalent brevet civilian ranks in the DMA, but were officially confirmed in their posts only last week by the Appointments Committee of the Cabinet, or the ACC, headed by Prime Minister Narendra Modi. These officers were also the first-ever military officers to secure these civilian appointments – and ranks – after Independence.

They include Lieutenant General Anil Puri, who becomes an additional secretary in the DMA, and Major General K. Narayanan, Rear Admiral Mohan Dhir and Air Vice Marshal Hardeep Bains, who are now joint secretaries of their respective services.

However, some analysts like retired Lieutenant General Ravi Dastane have questioned these positions. “In no case should the armed forces allow themselves to take on civil type designations, particularly in appointments being made by the AAC,” the three-star officer remonstrated.

He ruefully hoped to somehow ‘stop and reverse this unfortunate trend’ in what can now only be described as an irrevocable fait accompli. General Dastane also raised concerns regarding the ‘down gradation of two and three-star officers, deemed as joint and additional secretaries in the extremely rank conscious services, though this equivalence is based entirely on salary equivalences.

But a far larger number of other serving and retired service officers exceptionally applauded this move. They claimed it had finally ‘kick-started’ the services’ long-cherished goal of ‘integrating’ the armed forces with the Ministry of Defence (MoD), ostensibly to strengthen civil-military relations. They also believed that more such appointments would further advance India’s long-deferred defence modernisation, augment overall service functioning, force projection and military diplomacy in India’s neighbourhood and beyond. 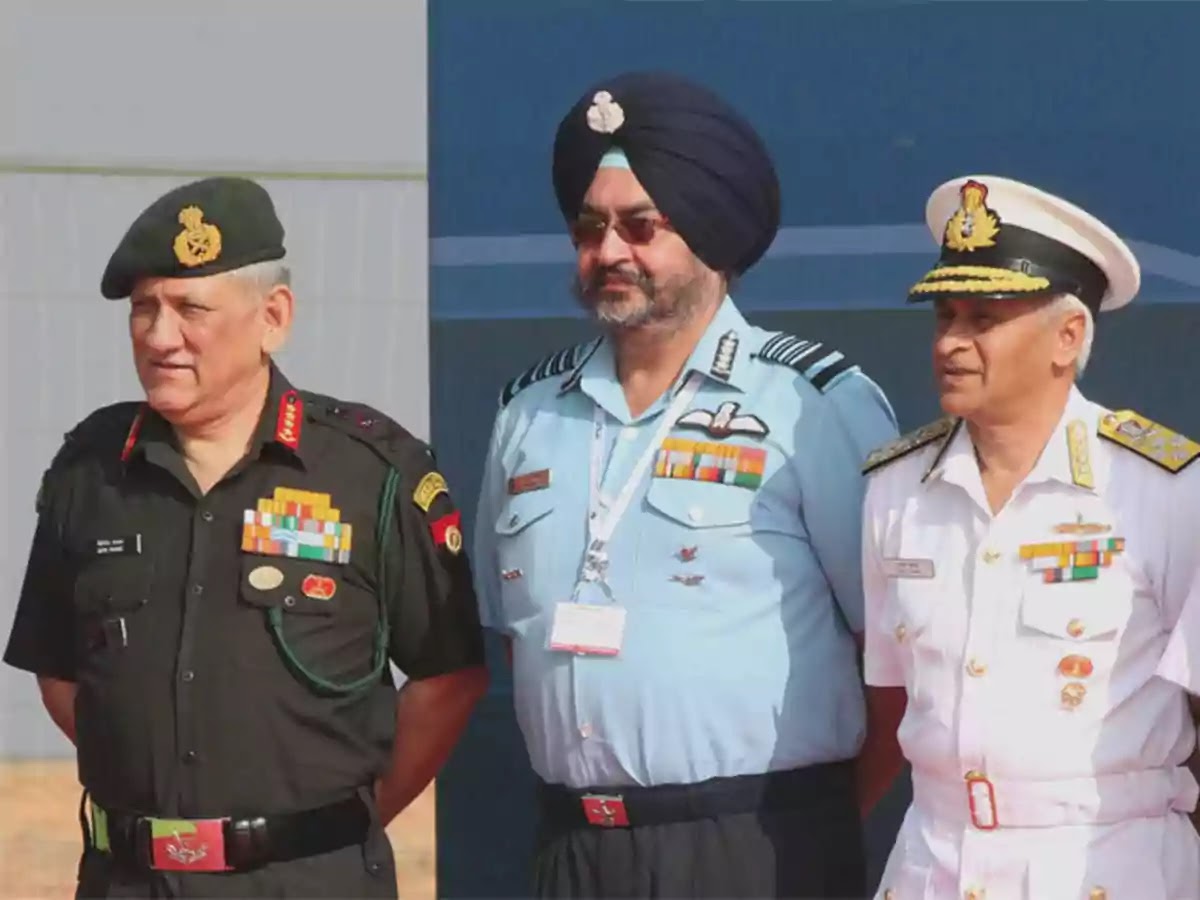 But shorn of such grandiose sentiments, there is little doubt that this opening move is a major ‘triumph’ for the services in their guileful struggle for assimilation with the MoD’s civilian establishment, if not a decisive gambit in the unfolding complex power chess game. Demands for this integration, passive before the 1999 Kargil war with Pakistan, became cacophonous thereafter and have eventually enabled the services to tiptoe up the MoD staircase to first infiltrate and eventually replace its functioning.

Years of lobbying and petitioning had paid off, with the services now securing cherished civilian job titles for their senior officers in the DMA, formulated in December 2019, that assumed several of the MoD’s policy and operational tasks. The DMA is headed by the Chief of Defence Staff (CDS) General Bipin Rawat, a former IA chief, who ironically also doubles as its secretary, making him one of 90-odd secretary rank officers in India’s federal government.

For its part, the DoD, headed by the defence secretary, according to the Allocation of Business Rules, 1961 is responsible for all defence policy and acts ‘conducive in times of war to its prosecution, and after its termination to effective demobilisation’. All three service reserve officers, defence accounts, the Indian Coast Guard (ICG), the Border Roads Organisation (BRO) and, most importantly, all capital materiel acquisitions and related establishment matters too remain part of the defence secretary’s remit. He is involved with the annual defence budget, MoD-related parliamentary matters and defence cooperation with foreign countries and other sundry issues.

Consequently, what is now galling India’s covetous strategic community of retired military officers and evening television news gladiators, is that the defence secretary – and not the CDS, as secretary of the DMA – continues to be responsible for capital procurements and the country’s defence. Hence in recent months, they have intensified their campaign for these vital responsibilities too to be transferred to the DMA. Currently, the DMA has been assigned control of the services formidable revenue expenditure, which includes salaries and operating expenses.

Also Read: Indian Navy to Contribute With Its 'Full Might' in These Difficult Times: Navy Chief on COVID-19

This line of reasoning, however, disregards the reality that service officers, including military chiefs, constitute an integral part of the MoD’s capital acquisition structure and equipment procurement processes. It also fails to take into account that over decades, innumerable Parliamentary Defence Committee reports and Comptroller and Auditor General (CAG) audits have routinely tabulated the military’s exclusive role in retarding its modernisation, due to technological over-reach and unrealistic tenders – many of which were periodically withdrawn, re-issued and once again retracted. Even late defence minister Manohar Parrikar had mocked the services at a public function in Delhi in 2015 for fashioning fanciful and implausible qualitative requirements, or QRs, for equipment. He had derisively claimed that these were based on ‘Marvel comic books’.

Undoubtedly, it is undeniable that the MoD’s civil bureaucracy is hidebound, inefficient, ill-informed and indolent in its approach to service matters and has been regularly castigated for being so by both the CAG and parliament.

But in comparison, the military’s bureaucracy is even more rigid and multi-tiered, rife with uncompromising hukums, rank sensitivity and consciousness that has circumscribed swift decision making. “It is disingenuous and presumptuous to argue that the problems and shortcomings of the armed forces will magically disappear either by inducting military officers into the DoD or transferring responsibility for military matters to the DMA,” said a former MoD officer, declining to be named.

But be that as it may, MoD insiders and analysts estimate that the political establishment, which looks upon the military as an electoral force multiplier, is poised to imminently transfer most, if not all prevailing DoD obligations to the DMA. Such a prospect would leave the former substantially hollowed-out, responsible for little more than sundry subjects like, for instance, minding its sole think tank, the Institute of Defence Studies and Analyses (IDSA) in New Delhi. The DoD’s control over organisations like even the ICG and the BRO too would putatively cede to the DMA once it was conferred overall charge of India’s defence.

Also Read: India Will Buy 30 Armed Drones Worth $3 Billion From US Under Major Defence Deal

Analysts said the final blow to the DoD’s edifice would be delivered by it losing management of the 42 Ordnance Factory Board (OFB) units that are imminently in the process of being corporatised. Moreover, the DRDO, agitating for long to become an autonomous and self-regulated body, akin to the Indian Space Research Organisation (ISRO) too was likely to secure its goal, considering its burgeoning importance in the MoDs atmanirbharta or self-reliance programme that is aimed at reducing materiel imports.

“The ultimate irrelevance of both the DoD and the defence secretary, as we know it today, is a foregone conclusion,” said the above mentioned former MoD officer. This situation is likely to materialise sooner than later, with the DMA in all probability replacing it eventually,

In conclusion, the workable prospects for the DMA’s ascendency and eventual efficacy are somewhat opaque, as the entire structural edifice does not seem to have been thought through by military planners. Rules and procedures, it appears are being made up as the situation evolves. The creation of the CDS is one such glaring instance, where lines of operational, administrative and doctrinal responsibility still remain blurred 17 months after General Rawat’s appointment was confirmed.

One principal hurdle that nobody in the military establishment has taken cognisance of, or deals with it in an ostrich-like manner, is the total lack of financial planning in service matters and the inability to take into account the government’s fiscal resource pool. After all, it’s obvious that without adequate monetary resources, which General Rawat can in no way independently augment at will, the DMA will in time find it difficult, if not impossible, to secure the country’s defence.