India on Israel- Palestine Conflict: Know About India's Support to 'Just Palestinian Cause' at the UN? 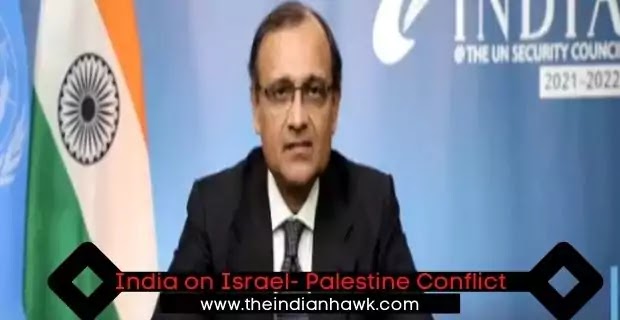 United Nations Organization has on May 21, 2021 welcomed the decision of truce between Israel and the organization Hamas. The truce has happened after 11 days of non stop bombarding over one another's territories causing heavy loss of lives.

United Nations Organization is always on heels to fulfill its motive of World peace and security. Recently on issues raised by China, UNSC held an emergency meeting regarding the Israel Palestine conflict. Many countries came in support of Israel and others in support of Palestine.

As hostilities continue for the seventh day in Gaza, the number of displaced people is increasing.

As of Monday, 58,000 Palestinians have fled their homes, and 42,000 of them have found refugee in UNRWA schools.

As hostilities continue for the seventh day in Gaza, the number of displaced people is increasing.

As of Monday, 58,000 Palestinians have fled their homes, and 42,000 of them have found refugee in UNRWA schools.

Israeli PM Netyanyahu tweeted on May 16, 2021 thanking 25 countries for their support against the Hamas attack. India however was not addressed in the statement. The reason could have been the statements made by India in the UNSC.

🇺🇸🇦🇱🇦🇺🇦🇹🇧🇦🇧🇷🇧🇬🇨🇦🇨🇴🇨🇾🇨🇿🇬🇪🇩🇪🇬🇹🇭🇳🇭🇺🇮🇹🇱🇹🇲🇩🇳🇱🇲🇰🇵🇾🇸🇮🇺🇦🇺🇾
Thank you for resolutely standing with 🇮🇱 and supporting our right to self defense against terrorist attacks.

India's permanent representative TS Tirumurti asked both Israel and Plestine to resume the dialogue and reduce their tensions. It was also made clear that India supports the two state solution and Israel was just reacting to the attacks by Hamas.

What was said by India on the Israel-Palestine Conflict?

Tirumurti in his statement said, “the events of the last several days have resulted in a sharp deterioration of the security situation. The indiscriminate rocket firings from Gaza targeting the civilian population in Israel, which we condemn, and the retaliatory strikes into Gaza, have caused immense suffering and resulted in deaths, including women and children.”

As per India's stance, both sides were urged to show restraint to the highest level and were asked to begin negotiations.

TS Tirumurti also talked about the city of Jerusalem and its connection with various Indians. He said," The Old City also houses the Al Zawiyya Al Hindiyya – the Indian Hospice, which is a historic place associated with a great Indian Sufi saint Baba Farid and located inside the Old City. India has restored this Indian Hospice"

Also Read: US Objects to UN Meeting on Israel, Gaza on Friday: Officials

He also said in the end which changed the entire dynamics, “in conclusion, I reiterate India’s strong support to the just Palestinian cause and its unwavering commitment to the two-state solution.”

Take a look below:

Who did India support at UNSC Israel or Palestine?

This implies that India doesn’t see Hamas’s rocket firing on May 10, which followed Israeli forces storming Al-Aqsa Mosque, as the reason for the recent conflict.

ii) TS Tirumurti's statement clarified the reason for the latest conflicts as per India. He said, “our deep concern over the violence in Jerusalem, especially on Haram esh-Sharif/Temple Mount during the holy month of Ramzan and about the possible eviction process in Sheikh Jarrah and Silwan neighbourhood in East Jerusalem,”

Also Read: Iran's Leader Khamenei Calls Israel 'Not a Country, but a Terrorist Base'

Various Arab families of the occupied territory of East Jerusalem face eviction by the Israelis. This was said to be the trigger of Arab protests last week.

This means that without clearly putting out any names, India called for the eviction process to be stopped and status quo ante to be restored at the Al Aqsa compound.

It was until 2017 when India openly supported the Palestinian cause. It called for a negotiated solution that may form a sovereign, independent state of Palestine with its capital as East Jerusalem.

Later in 2017, PM Modi changed the stance and said, " We hope to see the realization of a sovereign, independent, united and viable Palestine, coexisting peacefully with Israel. I have reaffirmed our position on this to President Abbas during our conversation today."

Why did India not support Israel straightaway?

India is a follower of peaceful coexistence. It is also a follower of Non Alignment Movement. So even though India receives and provides support to Israel, it would always be on Palestinian side here as it strongly says the land of the Palestine was occupied forcefully.

Moreover, facing similar problems in its own homeland via Pakistan and China, India would find it difficult to accept forceful occupation of the Jewish territory.

So India looking forward has tried to sort out the issue by raising the real issue of a two-state solution, coexisting side by side.

Also by referring to Haram e Sharif twice, it was implied that the real issue was not the Palestinian narrative. India addressed it along with Temple Mount which counted Jewish and Islamic religions together as well. India also openly condemned the rockets, but provided no such reference to Israeli reaction.