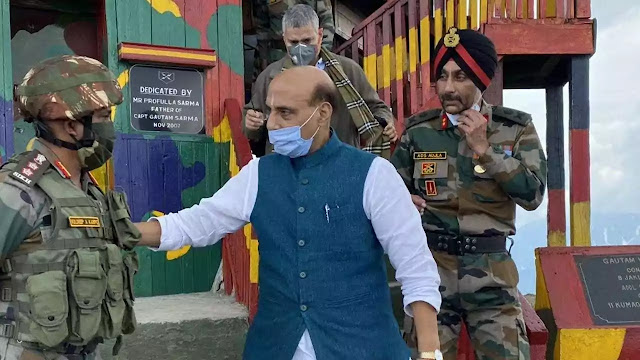 Under the dynamic leadership of our Prime Minister, Narendra Modi ji, a great impetus has been laid upon Atmanirbharta in various stratas and areas in our country. Complying to the same, even in the defence sector, great thrust has been given to atmanirbharta, which recently has been the corner stone of the Indian Defence Production policy.

This is perfectly in line with prime minister’s vision of Atamnirbhar Bharat .This is one of the biggest Make in India contract placed on any Defence private sector undertakings so far.Significantly the contract was handed over to HAL on the day of inauguration ceremony of Asia’s largest Aerospace exhibition on 5th February 2021.

The purpose of one of the biggest Aero India exhibition was to showcase to the international community, the India’s capability, capacity, and potential in defence manufacturing.In this exhibition nearly 538 exhibitors had participated. Besides, for promotion of indigenisation among armed forces many measures have been under taken.

Therefore the various pertinent questions which arise are:-

So by indigenisation, we mean the capability of developing and producing any defence equipment within the country for dual purpose that is for self reliance and for reducing fiscal deficit.As everyone is aware that India’s defence budget is the fifth largest in the world. At the same time India is one of the largest importer of arms (next to Saudi Arabia).

Therefore to reduce over dependence on foreign nations the then government at the centre changed the Indian approach from licence production to production based indigenous design and subsequently followed by co development co production with foreign partners including the then USSR (now Russia), Israel and France etc.

In the early eighties, DRDO rose to the occasion and initiated one of the game changer, commonly known as the Integrated Guided Missile Development Programme (IGMDP) with a mission to develop varieties of missiles viz Prithvi, Nag, Akash, Trishul and Agni series A1,A2,A3,A4 and A5 series and many others as per future requirements of the nation.

Parallelly, Government also set up a committee under the chairman ship of Dr APJ Abdul Kalam the then Director General & Secretary DRDO for chalking out 10 years plan for enhancement of self reliance from 25 to 70 percent. In spite of the fact that DROD achieved self reliance in missile technology to the tune of 96 %, but the other areas remained gray zone.

Till date the target of achieving self reliance up to 70 to 80 percent remained a distant dream. The reasons may be the divergent views of different stake holders concerning indigenisation visa vis import. The indigenization is also essential from point of view of obtaining strategic capability, security imperative and also for employment generation.

Because self sufficient and self reliant defence industry will place India among the top global powers. Modi Government after coming to power in 2014 realized the gravity of this precarious situation existing in the country.

So, it started with the concept of make in India to promote indigenous manufacturing in defence sector. Further to augment indigenisation and to encourage private players’ participation the present government at the centre undertook a myriad of measures.First, the defence procurement procedure 2013(DPP2013) was amended.

New clause indigenous design and manufactured was added as the most preferred way of of defence acquisition. Second, to encourage the private players participation and to expand the defence industry base, the present Government removed the restriction on annual capacity for grant of licence in defence sector and also established on line eBiz portal .

It also issued vendor development guide lines for their benefits.Third, to encourage foreign investment, government enhanced Foreign investment Limit(FDI) to 74%and in certain exceptional cases even up to the tune of 100 percent but following permission from Government. Fourth to encourage innovative R&D in private industry, the government has ear marked separate funds known as technology development funds to the tune of Rs.100crore.

Under this, the projects up to ten crore can be sanctioned to private industry. Till date 25 industries have availed the benefits of this scheme. Fifth for promoting manufacturing based on indigenous design and development , bold and path breaking decisions concerning restriction on import of 101 defence items has been taken.These items include high tech weapon systems, artillery guns assault rifles, covets, sonar systems, transport air crafts, radars and many more.

Sixth and one of the revolutionary step for indigenous development and manufacturing was keeping the provision of the special budget ‘for domestic capital procurement’ to the tune of around fifty two thousand crore rupees in defence budget for the year 2020-2021.

This initiative was widely welcomed by Confederation of Indian Industry (CII) and Federation of Indian Commercial and Industries (FICI). In fact as per FICCI’s view this is a great leap forward and year mark up of separate budget is viewed as the most desired policy initiative.According to them “Increased Capability Defence Production will not only offer great opportunity for domestic industry but also give immense strategic advantage to the country in the fast evolving geopolitical scenario.

Seventh the government also has unveiled a new policy concerning export of defence items to friendly nations. India has also set an export target of 5 billion US$ by the year 2025.

It is worth mentioning here that the ecosystem created by Modi Government over a period of seven years has certainly inspired multiple players to participate not only in defence manufacturing but also for creation of strong R&D base in their premises for in house design and development.

This will be the first step to produce a congenial niche for indigenous systems with low cost and in compressed time frame as per the requirement of the country keeping in mind the future threat perceptions.

It is also true that India enjoys unique position in peninsula in south Asia with nearly 1570 km of land border and maritime boundary is around more than 7000 km . Out of that more than half of boundary is shared by the two hostile neighbours China& Pakistan with whom India has border disputes.

Prolonged standoff in eastern Ladakh and subsequent action for disengagement between India army and PLA along LAC and relentless efforts by rogue neighbour for pushing terrorist and dropping arms and ammunition into new union territory of Jammu-Kashmir either through cease fire violation or using other means viz tunnels, drones etc are glaring examples.

The nefarious designs of both these neighbours further embolden the preview that India in coming years will have to fight a very brief,highly technology oriented utilizing multiple new contours and 2.5 front hybrid war with these two adversaries. Further Digital world especially social net working, Fake Whats Apps groups, various tool kits for inciting mobs both by external and internal forces has compounded the threat to national security in many ways.

Therefore to meet these challenges,atmanirbharta in defence is absolutely inescapable. Indigenisation in defence sector will have major role to play.The present echo system generated by visionary Government at centre is quite congenial for development of niche technologies with low cost in highly compressed time frame.

Of course DRDO will have to play a major role in that.Therefore it is high time for all those who matter in decision making to sit with various stake holders, prepare a blue print, fore cast technologies for at least fifty years head and prepare a road map for indigenous development and manufacturing not only to counter future threats but also to ensure India emergence as the super power in next five to ten years.