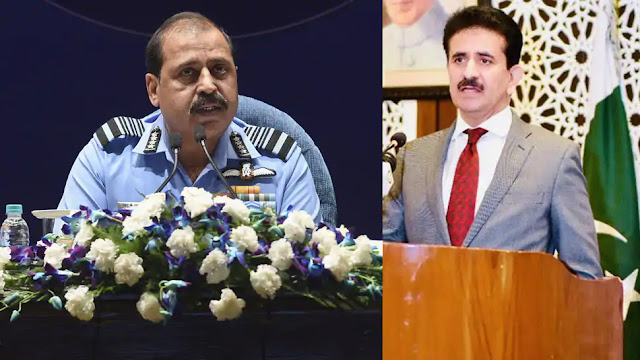 Days after Air Chief Marshal RKS Bhadauria's comment that the Indian Air Force is prepared to deal with a two-front war if such a scenario arises, a rattled Pakistan on Friday termed the remark as "irresponsible". Pakistan Foreign Office spokesperson Zahid Hafeez Chaudhri further asked the IAF Chief to "keep in mind his country's defence limitations", according to Pakistani media Dawn.

Amid the border standoff with China in eastern Ladakh, Air Chief Marshal Bhadauria on October 5 had said that the Indian Air Force is very "well-positioned" to deal with any threat and very strong deployments have been made in all relevant areas considering the security scenario.

Addressing a press conference ahead of Air Force Day on October 8, IAF chief said Chinese airpower can't get the better of India's capabilities but at the same time added that there is no question of underestimating the adversary, adding that the IAF is prepared to deal with a two-front war along the northern and western borders if such a scenario arises.

On Friday, in a provocative statement, Dawn quoted Chaudhri as saying that "certain senior Indian political and military leaders continued to 'make a career out of issuing provocative statements against Pakistan' at the cost of putting regional peace as well as India’s own security at risk".

"While making such braggadocio, the Indian air force chief must not forget India’s defence limitations, so embarrassingly exposed to the world, first during its misadventure in Balakot and more recently in Ladakh," Dawn quoted him as saying.

Chaudhri further warned India "not to underestimate the resolve of the Pakistani nation and the preparedness of its armed forces against any ill-conceived misadventure by India".

ANI quoted him as saying, "It depends on how the talks progress. The talks towards disengagement, followed by de-escalation, are on. We hope that the talks will progress along the lines that are expected: IAF Chief RKS Bhadauria, when asked 'how do you see the next 3 months play out in eastern Ladakh?'

IAF chief had further said, "current progress is slow, what we see is an increase in an effort to dig-in for winter, in terms of forces on the ground, in terms of deployment of air assets in airfields close by. Defence forces see the ground reality after that. Our further action will depend on ground realities."

"China will use Skardu (airfield in Gilgit-Baltistan) is an open-ended question. But if China needs to take Pakistan's help to confront us, I have nothing to say. If Skardu gets used by China then it is a collusive threat and we will deal with it accordingly," IAF Chief had added.

When asked about the situation in eastern Ladakh and a possible threat from China in the region, Bhadauria said, "Be rest assured that we have deployed strongly to deal with any contingency," adding "We have made deployment in all relevant areas; Ladakh is a small part."

The Air Chief Marshal said the IAF is "very well-positioned" to deal with any action along the northern border, adding that induction of Rafale jets has given us an operational edge.

India has deployed thousands of troops and heavy weaponry in the high-altitude region to deal with any eventualities. The IAF has also deployed almost all its frontline fighter jets like Sukhoi 30 MKI, Jaguar and Mirage 2000 aircraft in the key frontier air bases in eastern Ladakh and elsewhere along the Line of Actual Control.

The armies of the two countries are scheduled to hold a fresh round of talks on October 12.

Notably, India and China are locked in a five-month-long bitter border standoff in eastern Ladakh. Both sides have held a series of diplomatic and military talks to resolve the row, but there has been no breakthrough to end the standoff.