India Well-Positioned to Take On Any Threat by China: IAF chief 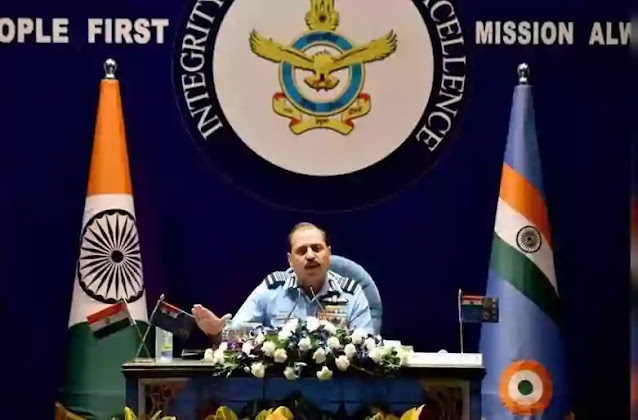 NEW Delhi: India is militarily very well-positioned, strongly deployed and ready to take on any threat from China in eastern Ladakh and elsewhere along the frontier, said Air Chief Marshal R K S Bhadauria on Monday.

“There is no question of China getting the better of us,” said the IAF chief, adding that there were “no indications” as yet of a collusive China-Pakistan threat in the ongoing military confrontation in eastern Ladakh since early May.

If Chinese fighter jets are positioned at the Skardu airbase in Pakistan-occupied-Kashmir, which is not the case as of now, then India will deal with it accordingly. “If China needs Pakistan's help to confront us, I have nothing much to say,” he said, taking a swipe at India’s larger neighbour.

The current progress with China is “slow” in diplomatic and military talks for de-escalation in eastern Ladakh. “What we see is an effort to dig in for the winter in terms of forces on the ground as well as aircraft deployed in Chinese airbases,” said ACM Bhadauria.

Noting that Ladakh was just a “small area”, he said the armed forces had strongly deployed in “all relevant” locations all along the 3,488-km Line of Actual Control (LAC) till Arunachal Pradesh. “Our further actions will depend on the ground realities,” said the IAF chief.

The armed forces, of course, also have to factor in the worst-case scenario of a two-front war and be prepared for any eventuality. While exuding confidence about India’s air combat power along the LAC, ACM Bhadauria said there was no question of “underestimating” any adversary.

The Chinese air force (PLAAF), with over 2,100 fighters and bombers, after all, is roughly four times the size of IAF, which is grappling with just 30 fighter squadrons when at least 42 are required.

ACM Bhadauria acknowledged IAF would reach just about 36-37 squadrons by the end of this decade. But, he added, “our offensive strike capability has been honed” with upgrades of existing fighters and inductions of new weapons and platforms like the Rafale fighters. “It gives us the ability to shoot first and strike deep and hard, even in contested airspace,” he said.

China’s “strengths” are in long-range air and ground-launched missiles, which could be used to target Indian airbases, strong air defence systems to prevent ingress by IAF fighters, and fifth-generation fighters like Chengdu J-20. “But we strategize how to handle such situations and integrate them into our plans,” said ACM Bhadauria.

As earlier reported by TOI, IAF has often war-gamed the scenario of Chinese early missile strikes in the event of as conflict, with the strategy firmed up to “absorb, disperse, recoup and retaliate” through its larger number of airbases facing the LAC.

IAF, of course, has also activated advanced landing grounds (ALGs) at Daulat Beg Oldie (DBO), Nyoma and Fukche in eastern Ladakh and Pasighat, Mechuka, Walong, Tuting, Along and Ziro in Arunachal Pradesh over the years.

The airstrip at DBO at an altitude of 16,614-feet, for instance, overlooks the strategic Karakoram Pass and is just a few km from the LAC and the China-occupied Aksai Chin region beyond. “It is a big threat for China that we have such a capability so close to the LAC,” said the IAF chief.