For Navy helicopters, ‘Make in HAL’, why look to foreign companies? 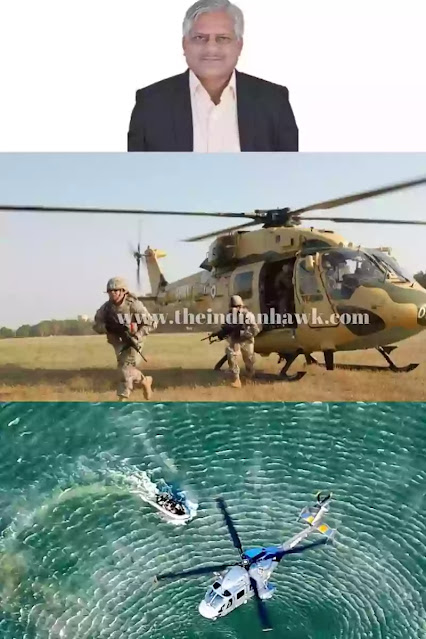 Hindustan Aeronautics Limited (HAL) started the design and development of the Advanced Light Helicopter (ALH) in 1984. The ALH was developed for both Airforce/Army versions and separately for the Indian Navy.

The Navy had taken a keen interest in the development of the ALH from the beginning and HAL delivered a small number of ALH Mark I helicopters to it in 2002-03. These were fitted with an autopilot which had all Navy-specific modes. However, HAL could not meet two requirements of the Navy at that time – long-duration hover and blade folding dimensions.

In 2014-15, HAL’s Helicopter Complex proposed to the Navy a version which had a two-segment blade and other modifications to meet its blade-folding requirements. The Navy seemed happy and displayed keen interest, but a firm decision was not made. In the event, HAL, on its own, launched two projects in 2019 with internal funding: (a) ALH Tail boom folding; (b) ALH blade-folding with two-segment main rotor blades.

The Navy’s INAS 322 squadron (Guardians), commissioned in 2013, operates ALH Mark I from INS Garuda in Kochi. According to an Indian Navy official in 2018:

“From a flying machine with many issues, she (ALH) has matured by miles…From the role of helicopter training of our pilots, the ALH has definitely progressed in the last five years.” He further went on to say, “Night flying over sea is considered the Holy Grail of helicopter flying over the sea as it is often fraught with risks and one that requires exceptional skills and courage.

Today, India is among the few nations around the world having the ability to undertake SAR (search and rescue) by night.”

The Navy has cleared the Guardians for undertaking night SAR missions. Further, ALH was deployed on a overseas embarkation operation at Abu Dhabi in 2017.

The ALH Mark III is an improved version in terms of reduced vibration levels using Active Vibration Control System, the fitment of a more powerful Shakthi engine, glass cockpit, etc. The Navy contracted with HAL for additional ALH Mark III helicopters in 2017. As of now, about 270 ALH of different variants are flying in the field and the ALH fleet has accumulated over 280,000 flight hours.

The Indian Navy in 2017 issued request for information (RFI) to buy 111 Naval Utility Helicopters (NUH) under the Strategic Partnership (SP) model. Under this model, an Indian private company is to tie up with a foreign strategic partner (for technology and manufacturing capability) and bid for the contract.

But HAL could easily offer a re-configured version of ALH Mark III, by removing some systems from it and adding a few other systems to satisfy the requirements. The dimensional requirements will be met through the two projects that HAL launched in 2019. It is known that an ASW helicopter will be of 10-12 tonne class and the ALH class of helicopters cannot carry out long-duration hover.

With an ALH variant, Navy will have additional advantages such as (a) low initial cost to Navy in terms of common tooling, testers, etc; (b) commonality with the existing fleet of ALH Mark I and III; (c) easy obsolescence management; (d) no Transfer of Technology cost; and (e) No licence fee.

HAL has been spearheading the design, development and manufacture of rotary wing platforms to meet the military’s requirements. There are just about half a dozen countries in the world that can design and develop helicopters, and their governments nurture continuous development to make improvements to existing equipment and to keep ahead of other countries.

HAL has been very successful in the design, development, testing and certification of helicopters, notwithstanding deliberate commentary in news media and social media to denigrate it. It should not be forgotten that HAL designed/produced the Cheetah, Chetak, Cheetal, ALH Dhruv, ALH Rudra (ALH Mark IV weaponised version) that are rendering commendable service to our warriors on the Himalayan borders now. The LCH and LUH are set to join them.

The ‘Strategic Partnership’ route is good for encouraging private sector defence production. But the question is, is it the best option when an indigenous option is already available to fit the NUH procurement? It is in the interest of both the Navy and HAL to join hands and make variants of the Navy’s choice (for NUH and future helicopter requirements). This is the right occasion to contribute towards “Atmanirbhar Bharat” in defence design and production.