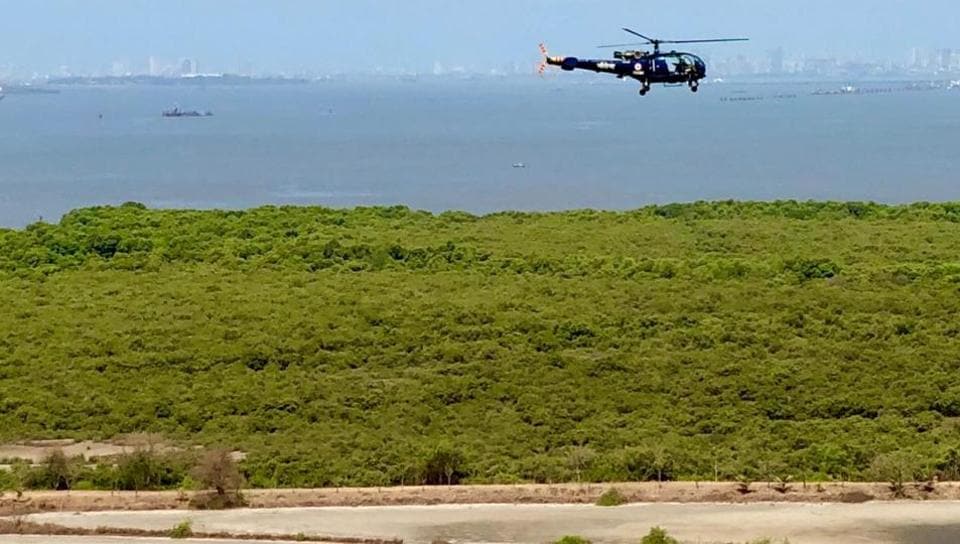 The Indian Navy said they undertook a routine migratory bird survey sortie as flamingos and waders were a flight safety hazard.

The survey was carried out to ascertain density of migratory birds as this habitat falls within the designated ‘local flying area’ (LFA) of Indian Navy Station (INS) Shikra in Colaba, officials said.

More 1.5 lakh flamingos have flocked to wetlands in the Mumbai Metropolitan Region (MMR) this year, the Bombay Natural History Society (BNHS) had said last month, estimating a 25% increase in numbers as compared to 2019.

BNHS said lower human activity during lockdown created ideal foraging conditions in Navi Mumbai wetlands. Local resident Sandeep Bangia, who photographed the helicopter around 10am on Wednesday, said he had never seen a helicopter over the flamingo habitat earlier.

“I live on the 17th floor, and what seemed like a defence helicopter was flying as low as the 14th floor,” said Bangia. “The whirring noise (from the helicopter) disturbed the birds as the chopper made multiple rounds over the patch within 10 minutes.”

The navy said, based on videos taken at the site, flamingo numbers were much more than previous years. “INS Shikra’s flight safety officer, skilled in bird migratory studies in LFA, was present for the sortie.

For any defence station, it is essential to know the presence of migratory birds for flight safety. Large migratory bird congregation at this zone poses a risk to helicopter movement, and needs to be avoided.

This is a safety requirement and there is no mischief,” said Commander Mehul Karnik, Indian Navy spokesperson. “Such surveys are usually conducted using unmanned aerial vehicles in large military airfields but in this region Chetak helicopters have to be deployed.”

A BNHS official requesting anonymity said, “A similar sortie was observed during our study in Panje in 2017, but not at the NRI complex flamingo habitat over the past few years.”

Sunil Agarwal, another resident said constant attention being given to this habitat makes a clear case for declaring the site a protected area.