PM Modi is scheduled to speak at the United Nations General Assembly on September 25 before returning to India. 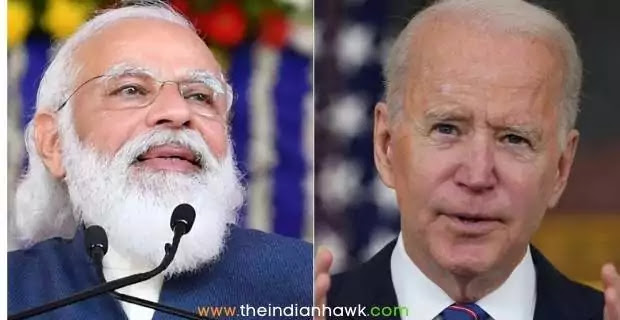 When Prime Minister Narendra Modi will visit the United States for a three-day visit following this month, he is expected to focus on strengthening bilateral ties, Afghanistan stabilization, counterterrorism, the Indo-Pacific, and climate change.

While the advance team, which is due to arrive in the US on September 9, will plan PM Modi's programs and engagements, the visit will kick off on September 23 with a bilateral with US President Joe Biden in Washington, followed by a physical summit gathering of QUAD partners the next day.

PM Modi is scheduled to speak at the United Nations General Assembly on September 25 before returning to India.

After a trip to Bangladesh in March 2021, this is PM Modi's first foreign trip.

Apart from strengthening bilateral ties, the security and diplomatic ramifications of the Taliban-controlled Islamic Emirate of Afghanistan, as well as the Indo-Pacific, will be at the forefront of the diplomatic agenda, as PM Modi meets with Joe Biden for the first time since assuming office this year.

This will also be the first QUAD physical meeting between Australian and Japanese leaders of government, despite the fact that Japanese Prime Minister Yoshihide Suga's physical presence is in doubt due to his decision to resign.

Prime Minister Scott Morrison of Australia has confirmed his attendance at the QUAD meeting.

With Pakistan openly playing cards in the establishment of the government in Kabul, Afghanistan and the role of regional countries such as China, Russia, and Iran would be top of the agenda. While countries such as the United Kingdom and Germany seek Pakistan Army assistance in combating the Taliban, Lt General Faiz Hameed, DG, ISI, has been stationed in Kabul for the past two days to ensure the formation of a pro-Pakistan government and the elimination of resistance in Panjshir with the help of Pakistani commandos in mufti.

ISI is primarily targeting Amrullah Saleh, the face of Panjshir opposition, because the former first vice president of Afghanistan has consistently thwarted the Pakistani intelligence agency's ambitious intentions. Despite Pakistani ISI, which controls the terror factory in the Af-Pak area, running the show in Kabul with a fatigued international community observing events passively, it is a cause for alarm.

The QUAD meeting will not only address regional security in the Af-Pak area but also in the Indo-Pacific, as China stands to benefit from the Taliban's rise in Afghanistan through its ally Pakistan.

The bilateral dialogue and QUAD summit will prepare the ground for the concerned nations to make individual decisions on the Taliban regime's legitimacy. Despite the Taliban's claims that Afghanistan will not be used against a third nation, Sunni Pashtun Islamists refuse to disown al Qaeda and are effectively controlled by the pro-Pakistan Haqqani Network terrorist organisation. The Taliban support worldwide jihad until the world is transformed into Dar-ul-Islam.

The architecture of the four-nation grouping, a type of rules of engagement hammered out by the member nations' foreign ministers, might be unveiled during the QUAD summit.

On September 25, Prime Minister Modi will address the United Nations General Assembly as India becomes a non-permanent member of the UN Security Council. While he is anticipated to speak on the world's most pressing challenges, the speech will be focused on the future, with an emphasis on climate change and terrorism. It is another problem that the UN has been shown to be underperforming on important topics such as Afghanistan and terrorism.