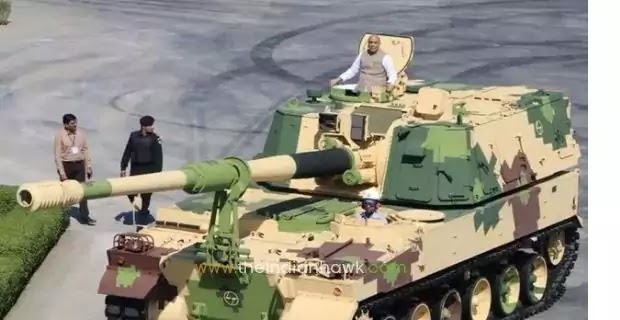 The Army is considering purchasing another 40 K9 Vajra Tracked Self-Propelled Howitzers for hilly terrain since China has become the new focus of the Indian Defence order.

The trials of three K9 Vajra dogs that were deployed to Ladakh earlier this year were successful, according to sources in the army and security sector.

At least two more regiments of 155mm/52 calibre howitzers would be ordered and stationed in the highlands, according to plans.

The order for the first 100 guns, which were primarily intended for use in the deserts, was placed with Larsen and Toubro, a renowned Indian private defence company (L&T). In February of this year, the business successfully executed the order.

L&T has entered into a technology transfer agreement with Hanwha Corporation of South Korea, the original producer of the K9 Thunder gun system.

“Vajra is a stunning and fearsome weapons system. It has a long-range, and because it's monitored, it makes moving about in the mountains easier,” a person added. “The technology may be strategically placed due to its range and mobility capability.”

According to sources, a cost required for the next 40 Vajras has yet to be determined, but the process is underway.

Tensions with China are paving the way for additional Vajras to be built.

Despite the fact that there was no intention for further orders at the outset, tensions with China have shifted the attention to the Line of Actual Control (LAC).

The Army has already placed an order for M-777 lightweight howitzers, which are presently being delivered.

Helicopters can pick up and transport these lightweight howitzers to forward areas.

With specialized ammunition, these guns have a maximum range of roughly 40 kilometres. In comparison, depending on the munition used, the Vajra has a range of around 50 kilometres.

“Neither gun system can be compared to the other. Both have their own special abilities, according to a second source. “The M-777 has the ability to travel to locations where the Vajra cannot. Vajra, too, has its own special talents. The combination of these two systems, as well as those now in use and those on the way, will increase the lethality of Indian firepower.”

K9 Vajra is made up of more than 80% indigenous work packages and more than 50% indigenization (by value) at the program level, according to L&T.

L&T claims it began indigenization early in the program, replacing 14 essential systems in the Korean "K9 Thunder" with indigenously developed and produced equipment for the trial gun used in user assessment trials.

In addition, L&T and the DRDO are developing a light tank known as the Vajra tank.

The chassis or hull stays the same, but a lighter cannon would result in a significant weight reduction due to modifications in the turret design.