new prime minister Naftali Bennett, is looking to minimise disagreements with the United States on the Iranian nuclear deal, the report added... 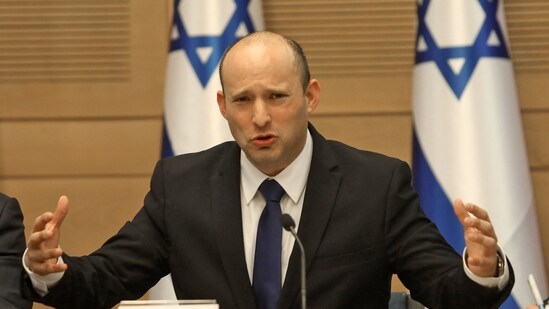 Naftali Bennett became the new prime minister of Israel on Sunday, topping his predecessor and former ally Benjamin Netanyahu's 12-year regime and ending a political crisis in the country that sparked four elections in two years. High up on Bennett's priority list as the new prime minister is coordinating with the United States on military and intelligence matters, the New York Times reported, adding that using Mossad, the country's spy agency, to sabotage the nuclear deal with Iran could still be on the table.

The Iranian nuclear deal had long been a bone of contention within Israel's political and military establishment. Benjamin Netanyahu, former prime minister, had expressed his gripe with the original 2015 agreement, the Joint Comprehensive Plan of Action, pointing out that it neither gave Israel sufficient security from the possibility of Iran developing a nuclear weapon nor did it cover significant issues like Iranian support to militias in neighbouring nations. Before being voted to the post of prime minister, Naftali Bennett had echoed similar sentiments, vowing to stop Israel from acquiring nuclear weapons. "The renewal of the nuclear agreement is a mistake," the New York Times quoted Bennett as saying at the Knesset, Israel's parliament, shortly before Sunday's vote.

A religious Jew by birth, Bennett had long positioned himself to the right of Netanyahu but played the kingmaker recently by partnering up with centrist and left-wing parties, an unlikely combination that defines the contradictions in the 73-year-old nation. Even so, Bennett's stance regarding the Iran nuclear deal is unlikely to be much different from his predecessor, the Amerian daily said, adding that the new Israeli prime minister, however, might try to influence some terms of the new deal, something that Netanyahu had refused to do.

Notably, the espionage operations of Mossad, Israel's spy agency, against the Iranian military establishment over its nuclear ambitions had continued even after Joe Biden was elected as the president of the United States of America and negotiations to rejoin the nuclear deal began. David Barnea, who was recently appointed as the director of Mossad, has said that Israel's Mossad will respond in "full force" if Iran continues with its nuclear program, hinting at the fact that the spy agency was well-aware of those officials within the Iranian military establishment associated with the nuclear program.

Israel, under its new prime minister Naftali Bennett, is looking to minimise disagreements with the United States on the Iranian nuclear deal, the report added, noting it as a marked shift from the adversarial stand it pursued with the US under the Obama administration. To this end, Bennett is even likely to replace Gilad Ardan, a longstanding Netanyahu ally and current Israeli ambassador to Washington, with a man of his own, the daily added.