launch stands out “as an icon of India-Vietnam defence partnership” and reflects India’s commitment towards building... 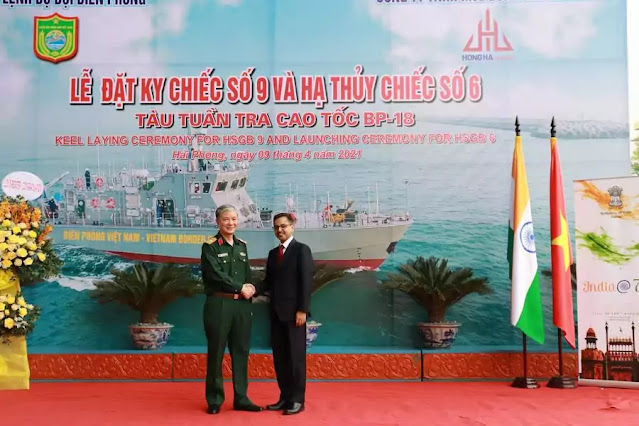 The Vietnam government has launched a high-speed patrol boat built with India assistance, and one more of a similar class is in the pipeline. The Vietnamese coast guard had inducted the first India-made patrol vessel in December 2020.

Vietnamese media reported that the patrol boat has been built with Indian support.

The launch stands out “as an icon of India-Vietnam defence partnership” and reflects India’s commitment towards building the capacity of the Vietnamese military, says Pranay Verma, India’s ambassador to Vietnam. He added that the comprehensive strategic partnership and defence relations between the countries would contribute to stability in the Indo-Pacific region. The Indian embassy added that despite disruptions by the Covid-19 pandemic, the joint project has progressed at a rapid pace.

Vietnam is making full use of the $100-million line of credit (LoC) extended by India in October 2014 during the State visit of the then Vietnamese Prime Minister to India. The two nations extended their relations to that of “comprehensive strategic partnership” and have been cementing military ties since then. The patrol boat, to be used by the Coast Guard will help Vietnam strengthen regional security, detect illegal activities, curb smuggling and assist in search and rescue operations.

Under the strategic partnership, India is supporting Vietnam, which lies in the critical and highly disputed South China Sea region, to build 12 high-speed patrol vessels for the Vietnamese Coast Guard. Of these, five are being built in Chennai at the Larsen & Toubro (L&T) shipyard while seven will be constructed in Hai Phong, Vietnam, with the company’s assistance.

Keeping China in the cross-hairs, the two nations have consistently maintained a high level of interaction at the diplomatic and military levels.