Indian Air Force to get a big Rafale boost, 16 fighters to land by April 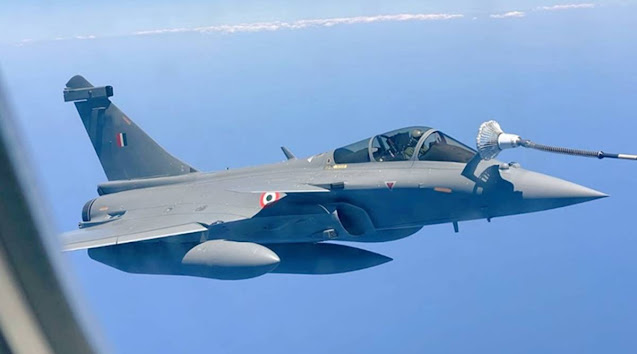 Five Rafale jets flew to the Ambala airbase via Abu Dhabi on July 29. Three more are landing in Ambala air base on November 5, three will arrive in January, another three in March and seven in April, taking the total number of fighters handed over to the IAF to 21 single-seat fighters and seven twin-seat trainer fighters.

The Indian Air Force’s strike capability is set for a boost with 16 omni-role Rafale jet fighters to be inducted into the Golden Arrows squadron by April 2021 and with France’s biggest jet engine maker Safran ready to make fighter engines and ancillaries in India, people familiar with the matter said on Tuesday.
Five Rafale jets flew to the Ambala airbase via Abu Dhabi on July 29 and have already been inducted into the IAF’s Squadron 17. The next batch of three Rafales will arrive in Ambala on November 5 directly from the Bordeaux-Merignac facility (there will be no stop as they will be fuelled mid-air), according to senior government officials. Seven Rafale fighters are already being used for IAF fighter pilot training in France.
Three more Rafales will arrive in January, another three in March and seven in April, taking the total number of fighters handed over to the IAF to 21 single-seat fighters and seven twin-seat trainer fighters.
Also Read | Top Army commanders to review situation in Ladakh, reforms at 4-day conference
This means that by April next year, the Golden Arrows squadron will be complete with 18 fighters and the remaining three can be sent to the Hashimara airbase in north Bengal’s Alipurduar to counter the threat posed by China on the eastern front.
All the fighters are equipped with Mica and Meteor air-to-air missiles along with Scalp air-to-ground cruise missiles. India has now requested Safran for the air-to-ground modular weapon known as Hammer with a 250kg warhead.
While France is willing to offer more Rafale fighters to India, Safran’s offer of making the Snecma M88 engines in India, four years from the day the contract is signed, is a welcome proposal, said the officials cited above.
Also Read | India to get 5 military theatre commands, one each for China and Pak
Not only will the M-88 engines be used by Rafale fighters but these can also be deployed to power Light Combat Aircraft Mark II and twin-engine advanced multi-role combat aircraft developed by the Defence Research and Development Organisation (DRDO).
The IAF plans to buy 83 LCA Mark I A jets, taking the total number of Tejas variants ordered to 123. Safran is said to be willing to offer engines with no third-country spare parts so that no additional approvals are needed, and with 100% indigenisation.
Also Read | Indo-US 2+2 meeting: Act immediately on terror, Pakistan told
The French offer may come up for discussion during foreign secretary Harsh Shringla’s visit to France, the UK and Germany, starting from Paris this Thursday. While DRDO can continue developing its own fighter engine, the Safran engine will fill the gap between development and manufacture.
Only the US, Russia and France have the capacity to produce fighter jet engines, with China still using the Russian RD-93 and RD-33 engines to power its jet fighters such as the J-31 and the JF-17.
Source>>