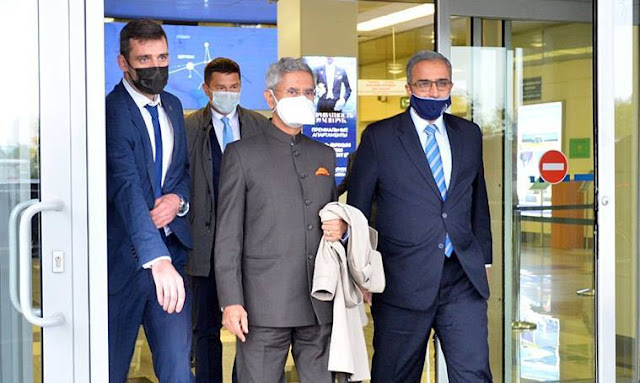 NEW DELHI: Foreign minister S Jaishankar plainly told his Chinese counterpart, Wang Yi, during the talks that ended late on Thursday evening in Moscow, that India would not de-escalate until there was complete and verifiable disengagement at all points on the LAC.

The talks, which got a little heated, saw Jaishankar setting out India’s bottomline — the overall India-China relationship will suffer if there is no peace on the border. Second, the "root cause" of the current crisis lay in Chinese forces breaching existing agreements with their massive build-up in April and May and transgressions that forced India to mirror positions and deployments.

Top sources here said the Indian mantra on the LAC would be "verifying" Chinese disengagement promises. In recent weeks, Chinese troops have repeatedly gone back on their commitments.

Read | After 4-day search, body of LeT terrorist fished out of stream in Srinagar


Interestingly, the Chinese readout of the meeting has Jaishankar saying that "the Indian side did not consider the development of India-China relations to be dependent on the settlement of the boundary question and India does not want to go backwards".

Indian officials who were at the meeting told TOI that India had emphasised that the relationship was dependent on a peaceful border. The Chinese side has been pushing the idea that the overall relationship can be insulated from the boundary crisis.


In Moscow, Wang Yi was quoted as saying that India and China had reached a "consensus" and were willing to "meet each other halfway". Indian sources said Jaishankar told Wang that the recent incidents in eastern Ladakh had impacted the development of the bilateral relationship and an urgent resolution was in everyone’s interest.

India’s actions over the past few months — taking aim at Chinese apps, technology, investments and projects — have made it clear that the overall relationship would be deeply impacted by the goings-on at the LAC. In his interventions, Jaishankar stressed that since the 1981 India-China "thaw", relations had been on a "positive trajectory" but that maintenance of peace and tranquillity on the border areas is essential to the forward development of ties.

The Indian side pressed the Chinese on why they had amassed troops and equipment along the LAC but did not receive a credible explanation. The massing of troops was a direct contravention of the 1993 and 1996 agreements, exacerbated by "provocative" behaviour of Chinese troops, leading to the Galwan clashes of June 15.

This has bred suspicion among Indian policymakers that the Chinese were not to be taken at their word. The Indian side believes the Chinese may well repeat this behaviour even after an agreement on disengagement, so New Delhi will carefully monitor coming actions.

Jaishankar also conveyed that India wanted a return to status quo ante — which meant troops had to go back to their permanent posts. But how this process was to be achieved in phases (the deployments are so large it will take weeks), would be determined by the military leadership.

But the immediate task is to make sure the disengagement is comprehensive and verifiable, sources said. "That is necessary to prevent any untoward incident in the future. The final disposition of the troop deployment to their permanent posts and the phasing of the process is to be worked out by the military commanders," said a source.