New Delhi: In a move that will redefine gender equality in the Indian Navy, Sub Lieutenant Kumudini Tyagi and Sub Lieutenant Riti Singh will be the first women combatants who will operate as specialists on board Navy helicopters which operate from the deck of warships.

Though women have been deployed as logistics and medical officers onboard Navy fleet tankers, they have not been a part of the crew onboard destroyers or frigates for lengthy durations due to a host of reasons - including the lack of privacy in crew quarters and the availability of gender-specific bathroom facilities.

That is set to now change with the two young officers who are training to operate a host of sensors onboard navy multi-role helicopters, including sonar consoles and Intelligence, Surveillance and Reconnaissance (ISR) payloads. In the event of combat, these women officers would detect enemy submarines and warships using the onboard sensors they operate and provide targeting solutions to the pilots of the choppers who would fire the actual weapons, torpedoes or anti-ship missiles.

Sub Lieutenant Kumudini Tyagi and Sub Lieutenant Riti Singh will be the first women officers who will be deployed on navy warships as part of the ship's crew.

It is expected that the two officers will eventually fly on the navy's new MH-60 R helicopters, 24 of which are on order. Widely considered the most advanced multi-role helicopters of their class in the world, the MH-60R is designed to detect enemy ships and submarines which can be engaged using missiles and torpedoes. In 2018, then Defence Minister Nirmala Sitharaman had cleared the acquisition of the Lockheed-Martin built choppers in a deal estimated at $2.6 billion.

"Things are changing in the Indian Navy every day. The navy is giving everybody an opportunity every day. Yes, we're breaking barriers every day but there are a lot of opportunities coming up every day. Whatever role the Indian Navy gives us, we will gladly take them," Sub Lieutenant Singh, a fourth generation armed forces officer, told. Her father had retired from the navy several years ago.

"Our training has been really rigorous. We've both completed over 60 hours of training.... We take pressure and tension bang on. We don't get worked up," she said. 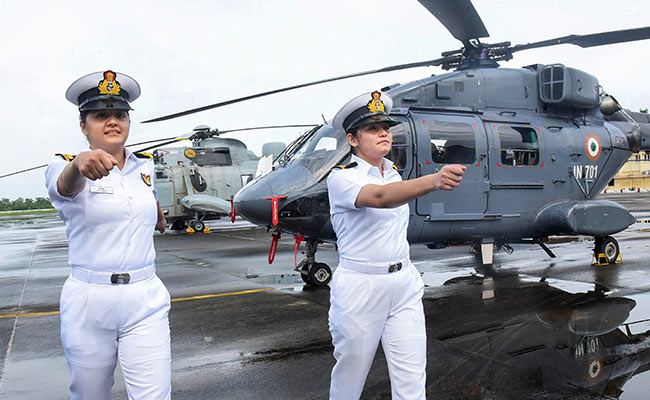 News of the deployment of women officers onboard ships comes on a day when it has emerged that the Indian Air Force (IAF) has shortlisted a woman fighter pilot to operate in its fleet of Rafale fighter jets. Operational conversion of this officer has begun though its unclear when she would be declared 'operational' with the IAF's Golden Arrows squadron in Ambala which is the first IAF squadron to operate the French built fighter, the most advanced in the inventory of the IAF.

"We've been treated equally... Whatever training our male counterparts received, we went through the same training... It is a huge responsibility, the task is challenge. We are looking forward to it," Sub Lieutenant Tyagi, who is from Ghaziabad near Delhi.