Indian and Chinese troops were facing off on Wednesday, barely a few hundred metres apart, in eastern Ladakh where shots were fired for first time. 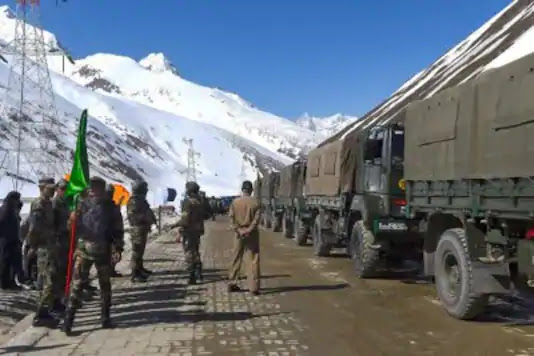 NEW DELHI: Indian and Chinese troops were facing off on Wednesday, barely a few hundred metres apart, in eastern Ladakh where shots were fired for the first time in decades, Indian officials said.
The nuclear-armed neighbours have accused each other of firing in the air during a fresh flare-up in the Ladakh region on Monday, violating long-standing protocols to avoid using firearms along their undemarcated borders.


"The situation is tense," an official in New Delhi said, adding that Indian and Chinese troops were squaring off in close proximity in at least four locations south of the Pangong Tso lake that both lay claim to.

"Both are on their own sides of the LAC," the official said, referring to the Line of Actual Control, the de facto border.

At a forward position near the Rezang La mountain pass, Indian and Chinese troops were only around 200 metres apart, another official in New Delhi said. Both officials declined to be named.

On Monday, the Indian military said Chinese troops fired in the air after attempting to close in on a forward Indian position. But the China military said it was Indian troops who fired the shots, threatening Chinese border guards during a patrol.

In photographs provided by sources in New Delhi from an area south of Pangong Tso taken on Monday, around two dozen Chinese troops with assault rifles hanging off their backs can be seen holding long poles with a curved blade. Reuters could not independently verify the photographs.

A 70-km long patch of desolate snow desert south of Pangong Tso has emerged as the latest flash-point between the Asian giants, with some 3,000 Indian troops strung along strategic ridges and hilltops, the first Indian official said.

The confrontation erupted after New Delhi mobilised soldiers late last month to occupy key heights to deter Chinese troops, whose movements suggested they aimed to occupy a hilltop that falls within territory that India considers its own, according to Indian officials.