On Covid-19, G7 is right to focus on vaccinating the world. After all, it is now conventional wisdom that no one is safe until everyone is safe. 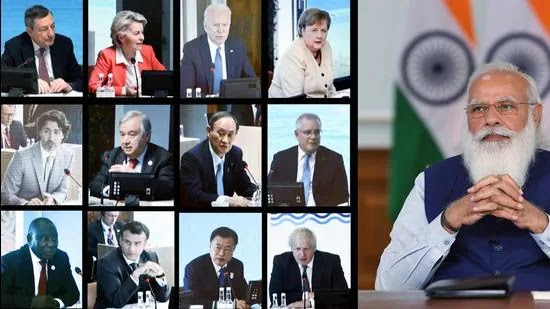 The much-awaited G7 communique from Carbis Bay is long on rhetoric and short on substance.

The communique itself runs into 70 paragraphs, covering, as it were, the three Cs: Covid-19, climate and of course, China. For good measure, it also provides important clues into the thinking of G7 countries on issues such as trade, democracy, human rights, multilateralism and post-Covid-19 global economic recovery.

On Covid-19, G7 is right to focus on vaccinating the world. After all, it is now conventional wisdom that no one is safe until everyone is safe. The trouble is that even assuming that all G7 countries, India and China can eventually take care of themselves (itself a tall order), at least three billion people in the rest of the world remain to be vaccinated. By providing for a paltry one billion vaccine doses over the next year, G7 has effectively indicated that even by the end of 2022, not everyone on this planet will be vaccinated.

More importantly, G7 ignores the three immediate actions recommended by the Report of the Independent Panel on Pandemic Preparedness and Response led by Helen Clark and Ellen Sirleaf, published in May 2021.

The three actions included one billion vaccine doses by September 2021 and two billion doses by end of 2022; waiving intellectual property rights (IPR) if voluntary action does not occur quickly; and lastly, committing 60% of the $19 billion required for Access to Covid-19 Tools (Act) Accelerator in 2021 for vaccines, therapeutics, diagnostics and strengthening of health systems. G7 falls short significantly on all three counts.

On climate, the question before the Cornwall Summit was not whether G7 countries would commit to net zero emissions by 2050. That was the basic minimum that they were expected to do, and which they have done. The real question related to climate finance — how will the world’s richest countries meet their Paris Accord commitment of $100 billion every year to finance the energy transition of developing and least developed countries? Here again, the communique comes up with the vaguest of language, referring to increasing and improving climate finance to 2025 and reaffirming the developed country’s goal to mobilise $100 billion.

China gets one full paragraph by way of attention. While saying they wish to cooperate with China on issues such as climate, G7 countries call on it to respect human rights in Xinjiang and autonomy for Hong Kong. Taiwan gets a mention, perhaps for the first time, with G7 countries underscoring the importance of peace and stability across the Taiwan Strait. This is certain to roil the Chinese.

G7, it must be said, has made a valiant attempt to counter the Belt Road Initiative with its own Build Back Better for the World (B3W) plan that aims to orient development finance towards resilient infrastructure, health systems, digital solutions and advancing gender equality and education. But the proof of the pudding is in the eating. On the issue of gender equality, a target has been set for getting 40 million more girls into education with funding of $2.75 billion for the Global Partnership for Education. This is welcome.

The biggest signal for China is perhaps the “Open Societies Statement” signed by G7 and guest countries comprising India, South Korea, Australia and South Africa. The statement spells out the unconditional commitment of these countries to human rights for all, both online and offline, democracy, social inclusion, gender equality, freedom of expression and rule of law.

At a time when there has been backsliding on these issues worldwide, including in the guest countries, this is a welcome move and is perhaps the best sign that democracies can unite on the basis of these universal values. China may pretend not to care about this, but you can be sure it will be concerned.

How should India read the G7 Summit?

First, PM Narendra Modi’s statement that India is a natural ally of G7, with an emphasis on its civilisational commitment to democracy, freedom of thought and liberty, will be welcomed by India’s friends all over the world. It is no secret that an impression, rightly or wrongly, has gained currency internationally that there has been some backsliding on these metrics in India. The PM’s statement should put these doubts about India’s commitment to rest.

Second, on climate finance, India has a mountain to climb. India will come under pressure at the COP 26 meeting in Glasgow to commit to net-zero emissions by 2050. Not just this, the communique appears to endorse the idea of “carbon leakage” and hence gives implicit approval to European Union’s idea of carbon border tax. This is particularly unwelcome for India.

Finally, the communique harps on “fair trade” much more than it does on “free trade”. Fair trade, by definition, stresses labour and environmental standards and the communique says as much. How these will be implemented without resort to protectionism remains to be seen. Similarly, G7 also endorses plurilateral initiatives at the World Trade Organization, something India hitherto has studiously avoided. Things will come to a head at the 12th Ministerial Conference of the WTO in December.

Mohan Kumar is a retired diplomat, chairman of RIS, and dean and professor at Jindal Global University.

The views expressed are personal.