Indian Army Deploys K-9 Vajra In Ladakh; Know All About Its Specifications & Strengths 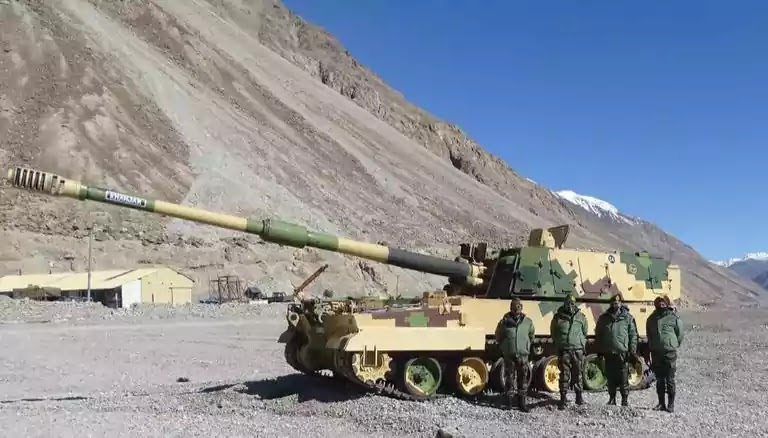 K-9 Vajra: The 155mm, 52 calibre K9 Vajra is built by L&T with technology transfer from South Korean defence major Hanwha Defense, and is based on its K9 Thunder. L&T had started indigenising the howitzer right at the field trial stage by replacing 14 critical systems with indigenous systems.

The Indian Army has been on an alert ever since the action of Chinese troops last year on the Line of Actual Control (LAC) of eastern Ladakh. Now the Indian Army has made special preparations and has deployed K-9 Vajra Selfpropelled Artillery to respond to any attack by the Chinese Army in the Ladakh plains.

What is the speciality of K-9 Vajra Self-propelled Artillery?

K-9 has been inducted into the Indian Army in 2018 and has been deployed for the first time in Ladakh. The K-9 Vajra Self-Propelled Artillery is a very effective weapon for action in the plains of Ladakh. It has a 155 mm cannon, which ranges from 18 to 52 km. It has tracks like tanks so that it can move on any kind of ground. Its powerful engine gives it a speed of 67 kmph. It consists of a crew of 5 soldiers, which is completely protected by strong armour.

The Indian Army started testing it in the Ladakh plains in February. The K-9 Vajra has the characteristics of both a tank and a cannon. Its armor like a tank keeps it completely safe from enemy fire and the track helps it to run fast in all kinds of fields. At the same time, it can fire heavy fire for a long distance like a cannon.

India has captured many important peaks

The Indian Army has also deployed its T-90 tanks in Ladakh. Since August 30 last year, India had captured several important peaks while operating on the southern bank of Pangong Lake. After this, India had deployed its tanks at an altitude of up to 15000 feet on the Rezang La, Rechin La and Mukhpri peaks in the Chushul region. After the agreement between the two countries in February this year, both the armies had retreated in many places in South Ladakh, but still soldiers are face to face in many places including Daulat Beg Oldi.