Indian Army and the Chinese People’s Liberation Army (PLA) have held 11 rounds of talks between corps commander-ranked officers since June 6, 2020 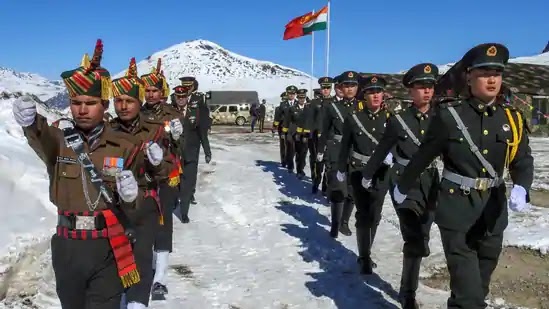 The Indian and Chinese armies began negotiations to resolve the border row in eastern Ladakh exactly a year ago, but the two sides have only had limited success in hammering out an agreement for disengagement of rival soldiers deployed at friction points on the contested Line of Actual Control (LAC), people tracking the military talks said on Saturday.

The Indian Army and the Chinese People’s Liberation Army (PLA) have held 11 rounds of talks between corps commander-ranked officers since June 6, 2020 to reduce tensions along the disputed border.

The only significant outcome of the military dialogue has been the disengagement of front-line troops and weaponry in the Pangong Tso sector in mid-February after the ninth round of talks, one of the officials cited above said on condition of anonymity.“Disengagement is stuck at the other friction points. Talks have not made any headway in resolving the problems at Hot Springs, Gogra and Depsang. Negotiations are on but there is no end in sight to the standoff. We will continue to engage the Chinese side to find a solution,” said a second official, asking not to be named.

Both armies have 50,000 to 60,000 troops each in the Ladakh theatre and the deployments haven’t thinned after the disengagement in the Pangong Tso sector.

On May 28, army chief General Manoj Mukund Naravane said his soldiers were on high alert as the PLA continued to base its troops and mechanised elements including tanks in its “immediate depth” across the LAC from where they could be deployed to forward areas at short notice. (Immediate depth in the context of the Ladakh sector refers to a distance of 150 km to 200 km from the LAC.)

Naravane said results should not be expected after every round of talks, citing the case of Pangong Tso, where disengagement took place after nine rounds.

The corps commanders’ meetings have had mixed results as those talks were successful in negotiating the disengagement in the Pangong Tso area but there has been no further progress, said former Northern Army commander Lieutenant General DS Hooda (retd). “It is important to understand that success in negotiations between military commanders has to be preceded by groundwork that is laid by political and diplomatic engagements. We saw this happening prior to the ninth round of military talks where both sides worked out the modalities for disengagement from Pangong Tso. A similar combined effort is required,” Hooda said.

He added that the military commanders by themselves cannot take any decisions unless the principles of an agreement have been worked out at the political or diplomatic level.

The Indian Army’s focus is on resolving outstanding problems with the PLA at Hot Springs, Gogra and Depsang, but the disengagement process has hit a wall as a result of the PLA’s reluctance to pull back its forward deployed troops and restore the status quo ante of April 2020, as previously reported by Hindustan Times.

The Indian Army’s patrolling activity has been affected in Hot Springs and Gogra, where rival troops are forward deployed and where skeletal disengagement took place last year, but the gains could not be consolidated.

The PLA’s deployments in Depsang have also hindered access of Indian soldiers to routes including the ones leading to Patrolling Points (PP) 10, 11, 11-A, 12 and 13. To be sure, the problems at Depsang predate the current border standoff.“Disengagement is just the first phase of a broader, more comprehensive plan of establishing the status quo ante of April 2020. It will be followed by de-escalation and finally de-induction of forces. We continue to remain vigilant,” Naravane said on May 28.

The two armies held the first round of military talks on June 6, 2020. However, the Galwan Valley skirmish on June 15, 2020 created severe complications and dashed hopes of any significant breakthrough. The brutal clash that left 20 Indian soldiers and an undisclosed number of Chinese troops dead created a huge trust deficit between the two sides.