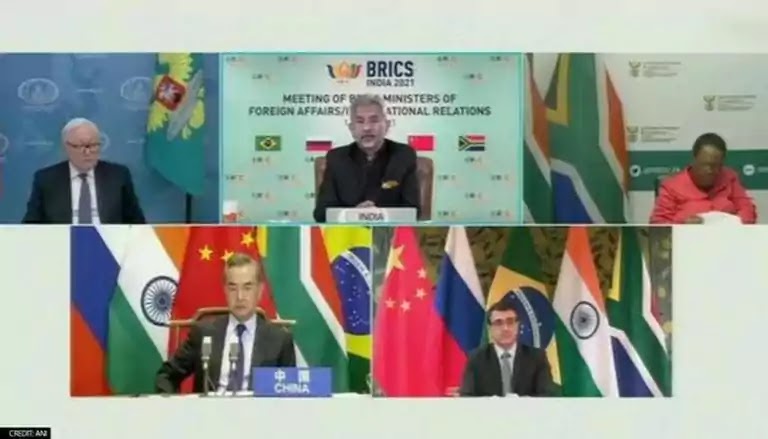 Addressing the BRICS Foreign Ministers meeting on Tuesday, External Affairs Minister S Jaishankar made a direct remark upholding the importance of "territorial integrity" in presence of Chinese Foreign Minister Wang Yi. Jaishankar's statement assumes significance as India has been at loggerheads with China for the territorial dispute at several areas along the Line of Actual Control (LAC).

As the 13th BRICS Foreign Ministers meeting was chaired by India, Jaishankar began the summit with his opening remarks stating that the BRICS strives "for a fair, just, inclusive, equitable and representative multipolar international system."

Adding further he said, "It is one based on international law and the UN Charter, that recognizes the sovereign equality of all States, and respects their territorial integrity while displaying mutual respect for interests and concerns of all. It is only by conducting our policies in accordance with these principles that we can expect to bring about the change we desire."

The mention of territorial integrity also comes amid the recent incidents of China ramping infrastructure in border areas, as highlighted by Himachal Pradesh CM Jairam Thakur recently. Jairam Thakur on Monday asserted that China is indeed trying to build up its infrastructure along the state border that aligns with Tibet, and has even started surveillance activities for the same. The statement of Thakur comes after his visit to the border areas at Samdo in Lahaul-Spiti district following reports of some construction activities, including those of roads near the border.

Moreover, the volatility in India-China relations continues after hitting rock bottom when the Chinese PLA had a violent face-off with the Indian Army in the Galwan valley in the Ladakh region along the LAC, leading to the martyrdom of 20 Indian Army jawans including a commanding rank officer. Although an official number has not been released by China, ANI citing sources from international intelligence had stated that more than 40 casualties were reported in the Chinese army. The two nations have now resorted to disengagement along the LAC and have held 11 rounds of Corps commander level military talks, however, the complete disengagement and consensus on the border dispute is a long way ahead.

BRICS (Brazil, Russia, India, China, and South Africa) summit is held by the five economic powers to exchange views on the issues concerning the five participating countries. This year the subject of discussion was strengthening and reforming the multilateral system with a view to enhancing its capacity to effectively address the diverse challenges of our time and to adapt them to contemporary realities, on global and regional issues of concern, sustainable development, countering terrorism besides discussing ways to enhance intra-BRICS cooperation, especially people-to-people cooperation.

With your permission, I would like to begin the meeting today. I welcome you all to the BRICS Foreign Ministers’ meeting. The Covid-19 pandemic unfortunately prevents me from greeting all of you in person.

It also continues to provide the larger context in which we assess the world and our policies. This is a time to reflect on its many implications. I also express my condolences for the lives lost due to this pandemic in all your countries.

India has assumed the Chairship of the BRICS on its 15th anniversary. We have come a long way from the first time our Foreign Ministers met in New York in 2006. But the principles that guide our grouping remain consistent over the years. We strive for a fair, just, inclusive, equitable and representative multipolar international system.

It is one based on international law and the UN Charter, that recognizes the sovereign equality of all States, and respects their territorial integrity while displaying mutual respect for interests and concerns of all. It is only by conducting our policies in accordance with these principles that we can expect to bring about the change we desire.

Over the years, BRICS has evolved its own unique model of engagement that is based on consensus. Our collective endeavour is also to ensure that global decision-making reflects contemporary realities. To this end, we have identified four key deliverables for our Chairship - Reform of the Multilateral System, Counter Terrorism Cooperation, Using Digital and Technological Solutions to achieve SDGs, and Enhancing People to People Cooperation. I am very happy to note that we have made substantial progress on each of these areas in the past five months with the continued cooperation and support of our partners.

Excellencies, dear colleagues, we have a packed agenda for our discussions today. I propose the agenda be adopted if there is no objection. I now look forward to hearing from each of you. I would like to give the floor first to Minister Wang Yi for his opening remarks.