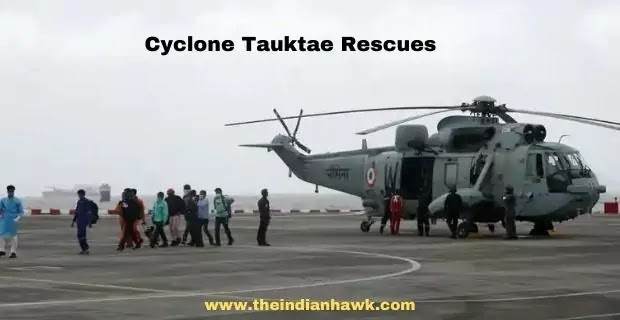 The UAE has expressed solidarity with India after Cyclone Tauktae struck several regions in the country and left scores of casualties.
The Ministry of Foreign Affairs and International Co-operation on Tuesday sent its condolences to the government of India and to the families of victims, the state news agency Wam reported.
The ministry wished a speedy recovery to those who had been injured by the cyclone.
At least 33 people have died after Tauktae, the most powerful storm to hit the region in more than two decades, which brought wind of up to 210kph.
A vessel serving oil rigs sank off Mumbai in the storm and 90 of the 273 people on board were missing late on Tuesday.
India's Defence Ministry said 180 people were rescued, with a mission under way to save the rest of the crew in challenging sea conditions.
Navy helicopters rescued all 137 people stuck on another barge that had slipped its anchor and run aground.
Hundreds of thousands of people were left without power when the storm hit the Gujarat coast.
More than 16,500 houses were damaged, 40,000 trees were uprooted and nearly 6,000 villages were left without electricity.
Just over 2,100 villages had their power restored on Tuesday night, officials told AFP.
The cyclone weakened slightly as it moved inland but still brought heavy rains and gale-force winds.
Indian Prime Minister Narendra Modi will visit Gujarat on Wednesday to survey the destruction.
Source>>